This is a caravan, used to shoot the elusive and especially magnificent animals like eagles, foxes, bears and wolverine. Shoot with a camera, silly, not with a gun! All that is required is a pair of functioning eyes and bags of patience. Take a pew, get comfortable and let the forest reveal itself to you; these are the maxims of a good wildlife watcher. At times, we increase the chances of attracting animals to the area by leaving out an animal carcass. Some of the first scavengers to identify the meal are ravens, and bears, being smart and observant, often follow the ravens to the kill—their eyes darting skywards attempting to follow the raven’s black and arcing feathered wingtips.

As well as being a colonizer species—the first tree to grow on the land if an open landscape is left to regrow forest—the birch is also an important host species for some seriously interesting fungi. Some live in partnership with their root system, with the roots and fungi exchanging nutrients and minerals through a process known as a symbiotic relationship. One famously powerful mushroom that does this is the fly agaric—it’s the bright red, spotted white one. They are highly hallucinogenic and viking warriors were said to eat them before battle as it made them fearless and beserk! Reindeer also have a liking for them and the Sami sometimes feed the reindeer with the mushrooms as a way of gathering them together before the winter arrives.
Thinking about it, we all knew reindeers like to fly 😉
Two other interesting birch-related species include tinder fungus and the chaga mushroom. The tinder fungus is a polypore mushroom, meaning it looks like a bracket growing on the tree trunk. It infects the tree through an opening in the bark and then paratises it, feeding of the tree’s own energy supplies. Once the tree dies, the fungi will continue growing to help the wood rot and return to the soil. It gets the name tinder fungus because if you soak it in water and remove the harder outer casing, the inside material can be beaten and stretched in a soft fibre. The resulting material is called red amadou and it carries an ember for a long time, meaning that it was an early precursors to the modern day lighter or box of matches—a way of carrying a spark for the next time you want to make a fire.
The chaga mushroom is also a tree parasite. It has the appearance of burnt charcoal—a hardened, blackened, crusty formation that looks like a tumor exploding out of the tree’s trunk. It’s long been used in traditional herbalism, thought to be a good cancer preventative and/or treatment. It’s typically collected, dried and ground into a powder then made into a tea or coffee type drink. See if you can spot it growing from any of the trees. 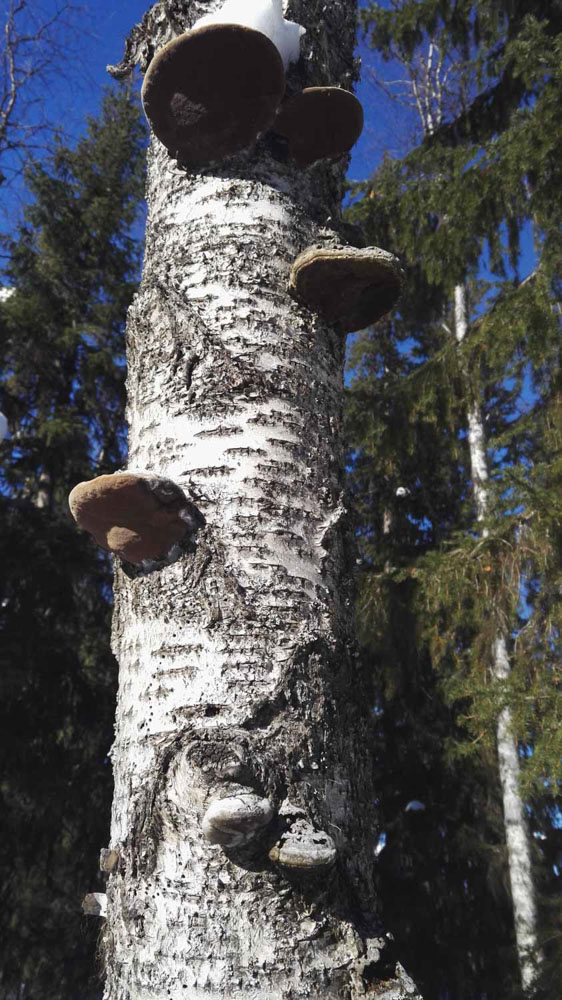